Art of Bonsai captures the imagination of Hyderabadis

Hyderabad: The art of Bonsai has captured the imagination and interest of tree lovers for centuries. And now, the theft of a Bonsai tree from the upscale Jubilee Hills has turned the focus to this artwork in the city.

Recognised as artworks, and in some cases as even masterworks, these trees require years of styling, wiring, provision of the proper amounts of water and sunlight, repotting, and pruning. Growing a tree, while containing its growth, demands everlasting devotion without the prospect of completion from the owner.

It, therefore, doesn’t come as a surprise that bonsai experts are often so attached to their plants that they become a part of their family. For Sridevi, wife of former Director-General of Police V Appa Rao, who was the victim in the recent bonsai theft, says she was heartbroken when she heard the news from their gardener.

“I had the plant with me for more than 25 years and had been tending to it every day to give it a proper shape. It felt like someone stole my child,” she shares. Sridevi, who is also the president of Friends Bonsai Society Hyderabad, shares that she was not very hopeful that she would get the plant back. “I didn’t think I would get it back, and that was very depressing. Kudos to the police for finding it out so soon. I was so overwhelmed to see my plant when the police brought it back.”

The stolen Bonsai, which was worth Rs 1.5 lakh, has left many wondering how these plants are valued. 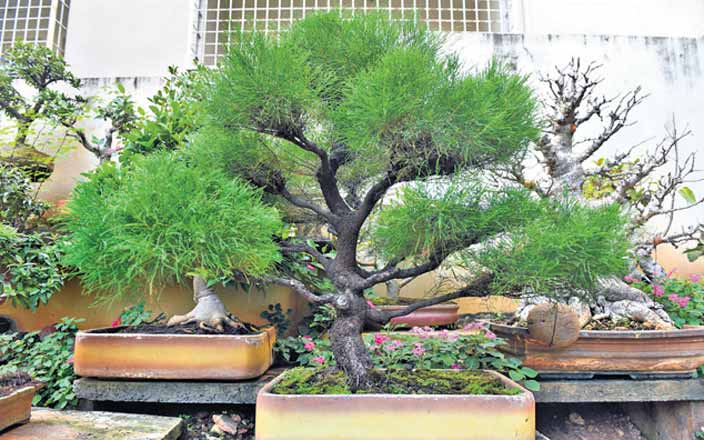 Dr. DLN Prasad, a well-known plastic surgeon from the city and is the proud owner of 200 bonsais, has a very witty answer to this question. “It all depends on the willingness of the seller to sell that plant and the madness of the buyer to purchase it,” he says with a smile.

A self-taught bonsai expert, Dr. Prasad adds, “Most of the plants that I have, have been grown from seeds. It’s not a quick process. It takes years to grow, nurture and shape the plant. My first bonsai, a peepal is at least five decades old and still needs tending to. To grow a bonsai one needs a lot of awareness and dedication, and that’s why it’s very difficult to put a price tag on the plant. I won’t sell my plants even if someone gave me crores.” 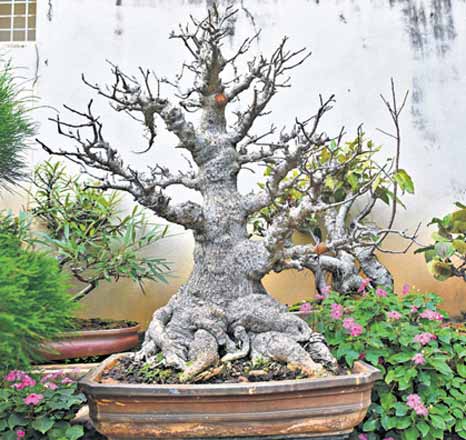 Jacqueline Babitha Xavier, the founder of Sweat n Burn Fitness Studio and a diehard bonsai lover, says that with the growing popularity of bonsais, several people have made bonsai a business.

“My bonsai are decades old. As the plants keep growing, you have to be very aware of each development. You should know thoroughly about the plant, also have a vision about the shape you want it to take, at the same time you shouldn’t disrupt its growth,” she says.

“Every day, once I am done with my work I sit with my plants. It’s a never-ending hobby,” Jacqueline says, adding, “There are many who sell these plants too. But mostly the trees being sold in the name of bonsais are not real. Most of them just plant a small tree in a tray and sell it for thousands. Unfortunately, people don’t understand the efforts that go behind growing dwarf trees, because if they did they won’t be able to put a price tag on it.”

Originating from the ancient art of “penjing” in China, bonsai was first introduced to Japan in the 6th century by a group of Japanese Zen Buddhism students returning from their overseas travels. They dubbed it “bonsai”, which literally means “planted in a container”, and at its most elementary level, the art is simply growing a wild tree inside a small vessel.

Stealing is not a new thing

This is not the first time that a bonsai theft has been reported.

In November 2020, a plant enthusiast was charged for stealing 45 bonsai trees worth $30,000 from his neighbours in Sydney’s southwest. Another theft of two historic bonsai trees from the Pacific Bonsai Museum was reported in Washington, United States. Earlier in 2019, a Japanese couple was robbed of a 400-year-old tree in Tokyo.

The oldest bonsai tree is a Ficus bonsai tree, which is reported to be over a thousand-years-old. It is the main tree on display at the Italian Bonsai museum Crespi. Yes. Bonsais have a museum too!

Telangana Today is a registered English language newspaper in India. The paper aims to mainly focus on the politics and developments of Telangana state. The newspaper is owned by Telangana Publications Pvt. Ltd.

Mask up Hyderabad: The artists behind the Shamshabad wall art

Hyderabad: HMDA to host first dance festival from April 3 to 11

Unveiling the Story behind Jayesh Ranjan